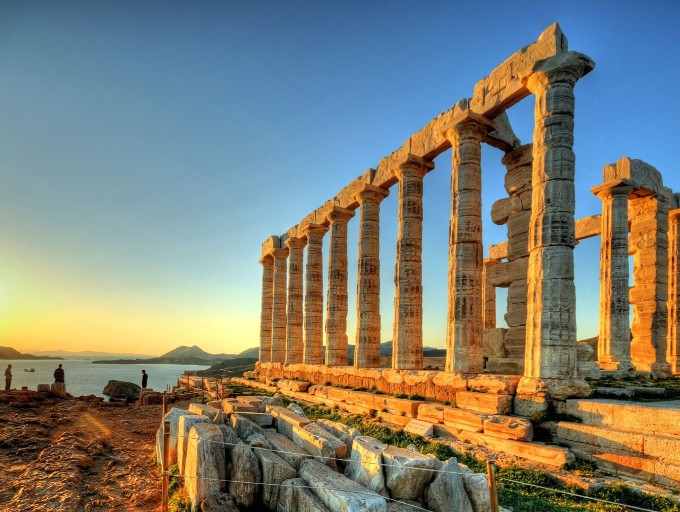 SOUNION
Sounion is the name of the cape located in the southernmost part of the prefecture of Attica. Its beaches are mostly rocky and steep while a low hill rises with amazing views of the Aegean.
Sounion, has been known since antiquity due to its important geographical location for the city of Athens while the first recorded reports come from Homer in the 9th century BC. The important geopolitical value of the area urges the Athenians in the 5th BC. to the creation of an exceptional temple dedicated to Poseidon who according to Greek mythology was one of the 12 Olympian gods and God of the Sea. At that time, a fortification was built to protect the city of Athens from invaders. The Temple of Poseidon was built of marble mined from quarries in that area and was "the apple of discord" for many enemies of the Athenians.
Great finds from the area are housed in the Archaeological Museum of Athens. In recent years, the wider area has been upgraded due to the ruins of the ancient temple of Poseidon that are located in it while it was declared a national park due to the environmental value of the area. It is worth noting that at a very close distance from Sounion are the ancient mines of Lavrio that were an important factor for the development of Athens.
Sounion is a top tourist destination that stands out for the wonderful route, the archeological site, the Temple of Poseidon and the idyllic sunset. In case you are in Athens and wish to visit the area, it is recommended to see more information on the CAPE SOUNIO TOUR page while on the pages ATHENIAN RIVIERA TOUR and ATTICA TOUR you will find more options to combine or to add other activities.
ATHENS TAXI DRIVER
13, Feakon str, P. Faliro
P.O 17563
Athens-Greece
Τ: +30 6909444888
M: +30 6936255440
info@athens-taxi-driver.gr
https://m.athens-taxi-driver.gr